Terror Management™: A Solo Exhibition of Works by Jesse Draxler opens at Booth Gallery in NYC ( 325 West 38th Street, New York, NY 10018) on January the 9th. If you have the opportunity don’t miss this occasion to see his works. The Facebook page event is here and the post I dedicated to Jesse’s works is here. 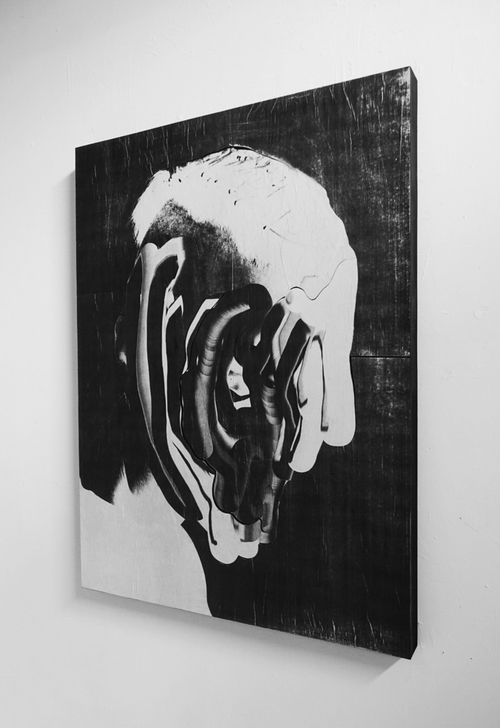 Booth Gallery is pleased to announce “Terror Management™”, a solo exhibition of works by Jesse Draxler. The exhibition will take place at 6 p.m. on January 9th 2016 at Booth Gallery (325 W. 38th St. NYC, NY). The title of the show comes from “The Worm at the Core”, a book that focuses on a scientific examination of the knowledge of our mortality and its pervasive effect on human affairs. “The fact that one day we will die”, says the artist, “has been governing both our internal behavior and our interactions with society throughout all time, since the advent of self-awareness”. The title of the exhibition, conceived to indicate the ability of human beings to manage their fear of death, includes the “™” symbol as a nod to both repetition (TM™) and branding, or as the artist states “what could be a fictional firm specialized in the management of terror.” Draxler’s artistic practice represents his own way of dealing with his deepest fears, anxieties and nightmares.

Jesse’s work embodies a well-thought-out analysis of the ambiguous connection that exists between anonymity, individuality and self-exploration. The faceless figures frequently depicted in his collages refer to his own identity, whereas the lack of detailed facial features carries the idea of a universally recognizable message. Jesse’s current works are representations of the feelings he has been working through for the entirety of his life. Confronted with a relatively unknown and troubling past, a daunting yet exciting future, and a present in which he often feels stale and out of touch with himself. Wry humor and wit are often present in his work in the form of visual absurdities and social commentary. Through philosophical research, general intrigue in the sciences and a wonderment of the supernatural, Jesse has created a world where everyone is both a demon and a deity. Where the want to evaporate into thin air is not just a feeling but a very concrete possibility.

Jesse Draxler is a fine artist, illustrator, art director and designer currently working out of Los Angeles, CA. He attended the College of Visual Arts in Saint Paul, Minnesota, where he graduated with a BFA in 2007. Jesse’s client list as an illustrator, art director and collagist includes The New York Times, Target, Prince, Chelsea Wolfe, The Black Queen, Dazed & Confused, Dansk, and No Tofu. His works have been featured in many group and solo exhibitions, including: Variations at Galerie Joseph in Paris, France in 2015; Untitled at SWGR Gallery in Miami, FL in 2015; Pink Pistols at Doomed Gallery in London in 2015; Untitled at Soze Gallery in Los Angeles, CA; Untitled at Smashbox Studios in Los Angeles, CA. Draxler’s fine art works can also be found in many private collections. Booth Gallery is located at 325 West 38th Street, New York, NY 10018